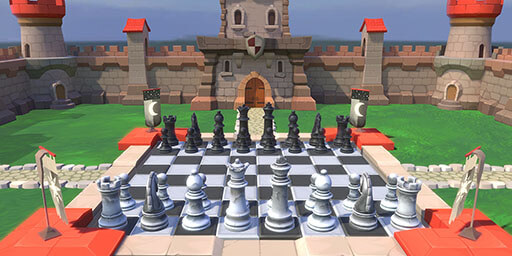 Chess Heroes
The King's soldiers have gone missing! Track down the missing pieces, and capture them back by playing fun chess puzzles that teach you rules and strategies of the game. Power up your army by conquering challenging side-quests, and uncover the true villain behind the disappearance of your subjects. Featuring an elegant interface, beautiful art, and relaxing music, it's the world's best chess game... for beginners!

When I published the original Chess Heroes demo, I got surprising feedback: kids of my friends were playing the demo, and then -- for the first time -- asking to play chess with their parents! The idea that my little game was somehow bringing together two generations of people over a chess board was exciting.

Several years later, I hired professional artists and designers to flesh out the (recently overhauled) Chess Heroes project. Managing their work while doing contracts for Pipeworks, and handling code duties myself, we created a beautiful demo of a promising game, and put it up on Kickstarter in September 2016. While feedback at events like Maker Faire and the Seattle Indepedent Expo was enthusiastic, we encountered unexpected resistance from chess teachers ("it doesn't teach chess properly"). Coupled with my lack of marketing experience (even though I had hired a marketing person), the campaign failed.

It was a pity, but we didn't take it too hard. People still ask about it, so I think it's just a matter of time before it surfaces again. I am too excited about makinga game that can enrich lives and bring people together to let it lie down forever!