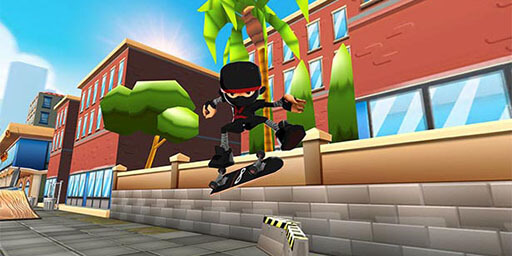 Epic Skater
Hit the streets and do tricks for high scores in this fast-paced side-scrolling endless skating game!

Built in Unity, a series of lead programmers with little formal training and no game experience had done their best, but the game took 17 seconds to load, and hundreds of warnings flashed on the console every time the project compiled. Each lead had brought their own style to the codebase, leading to a rat's nest of invokes, coroutines, and public variables modified by multiple other classes, with no clear order of operations. They were also mixing Javascript and C#. It was a mess... but it was exciting!

Over the course of eight months, I rebuilt the codebase using state machines and best practices for Unity. Load time was brought down to five seconds, I integrated multiple ad managers, added in-app purchases and player customization, and made a host of improvements to the code's stability. When the core game was solid, I brought on an Android programmer to integrate Google Play, and handled iOS and Kongregate's libraries myself.

Epic Skater launched to good reviews, was featured on the Apple Store and Google Play, and has been downloaded millions of times. It was a great ending to a cool project.