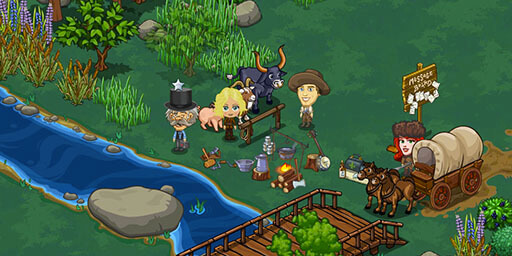 Frontierville: Pioneer Trail
Feeling restless on the homestead? Hitch up your wagon and head to a new frontier on the Pioneer Trail!

In 2011, Zynga, then a rapidly-growing company on the cutting edge of social gaming, hired Buzz Monkey to assist an all-star team working on the first-ever expansion of a social game, the surprise hit FrontierVille. As one of the "first boots on the ground," it was my job to help establish a good working relationship with the company. (Zynga acquired Buzz Monkey in 2012)

Working as a Narrative Designer, I wrote and implemented missions and dialog. At that point in time, they were emailing spreadsheets back and forth, leading to a number of time-killing errors due to "immediate obsolescence." Using experience gained on ESPN U, we introduced them to Google Docs, and helped streamline their process.

When I gave my two weeks notice to leave Buzz Monkey, I was asked to spend those two weeks rewriting the entire expansion. This led to a long-term contractual relationship with Zynga that made it possible for me to learn how to code professionally, while contributing content remotely.